How to take a photo without owning a camera

When in Rome.
I want a photo of myself with the Fontana di Trevi.
I did not take a camera with me. It’s heavy and I’m scared my fancy nice camera will be stolen in this big crowd of tourists.
There - I spot a friendly looking tourist, taking a selfie with the fountain.
Scusi, can you take a photo of me please? I ask.
Yes, of course, the answer.
The thing is, I don’t have a camera on me, could you take a photo on your phone and e-mail it to me, please?
I get a strange look. Then agreement.
I have my photo taken and dictate my email address.
The photo is sent.
Nice one. 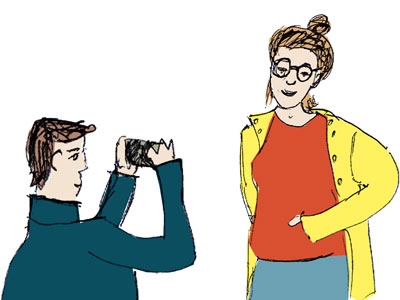 A prime examples of planned obsolescence is the disposable camera. It is sold as part of a borrowing system, but is a pure engine for waste creation. It is a one-time use product that gives freedom to its user through its temporary nature, which can only be topped in ridiculousness by the disposable digital camera. At first, the disposable camera may seem like an attractive alternative to buying a permanent analogue camera. It is readily available to buy in most drug stores and extremely cheap in comparison to the cost of a roll of film. Its value lies in its predestined temporal nature: It can be used in any situation in which robbery or damage are likely, such as on adventurous holidays, festivals or nights out. It is often used when a camera needs to be lent out, like for lost art projects or during weddings. The temporary nature of the disposable camera can be explained by a desire for carefreeness and carelessness, the desire to live in the moment and experience new things. At the same time, it is the epitome of consumerism and throwaway culture. Taking the photos itself can be seen as a phenomenon of showing the world what you have experienced and a new way to gain social status. Conceptually, the camera never truly belongs to the person who bought it, it is part of a borrowing system and the camera only acts as a tool the film company lends you to be able to use their product and service: the film and its development. However, when examining this system more closely, it becomes obvious that it cannot work as promised. In order to get the film out of its shell it has to be completely broken and hence the camera cannot be reused without significant production effort. It cannot simply be refilled and recirculated. The system also fails, because it is not guaranteed that all participants stick to its rules. As soon as a camera is returned to a film developer that is not part of the network the camera simply gets thrown out rather than being returned to its producer. The full impact of this can only be grasped when taking apart one of these cameras and seeing the large amount of parts and electronics needed to make this product work. Figure 2 shows a collection of used disposable cameras in a film developing shop.

A research experiment done of during my first year at Design Products consisted of borrowing complete strangers' camera phones and their photographic skills. By London sights I approached people taking selfies on their smartphones asking them to take a photograph of me. This is an established behaviour. I turned the situation into the slightly obtruse, by telling them that I do not have a camera and asking them to take a photo on their phone and emailing it to me. In the majority of cases it worked and I received a photo (figure 4). The ease of digital photography combined with the immediacy of email and the convenience and affordability of mobile Internet make a transaction possible that is unthinkable when using analog cameras. It was a response to the extraordinary waste creation observed in disposable cameras. This approach brings with it a similar type of risk or thrill loved in disposable cameras, in which you do not know whether the photo will come out well or whether you will receive it at all. The beauty of this camera borrowing system is that you can easily start a conversation with a complete stranger and upon leaving you already have their contact details and name, a potential beginning of a friendship. The main aim however, was to illustrate that you do not necessarily have to own or pay for everything that you want to use, after all it is the photo you want and not the camera.